Creative Ways to Save Money in Your Small Business

Screen Capture: Creating a Video of What’s On Your Computer Screen 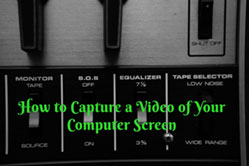 Sometimes, when you are trying to explain what you see on your computer screen, things get a little frustrating. It’s ok, we have a great little tool for those of you who have a Windows 10 machine, that will make your life easier.

Win 10 has a video screen capture tool built right into the operating system. Initially designed to help gamers capture video of their game play, it has a number of other uses — including capturing images of how wonky your computer may be acting — or showing others how to do this or that on their computer.

Remember this is only for WIN10 machines: Hold down the WIN button (it’s to the left of the space bar on most keyboards) and simultaneously hit the “G” button (for gaming). It’s a pre-programmed shortcut.

When you do this, it will launch the video clip tool. It will also ask you if you are using this to record a game. (You have to say yes to continue to use the tool, presumably to prevent you from recording full screen videos of movies or other copyrighted materials).

Once you have done that, you open up what you want to record and hit “WIN + ALT + R” buttons all at the same time. The control bar pops up and the recording begins. It automatically saves your recorded video in a folder named “Captures” which is pre-designated on your computer.

To change that location (or the shortcuts or anything else that’s preset) just go into the “settings” on your computer (a small gear-shaped icon in your bottom toolbar on your computer), scroll down to “Gaming” and select “Gaming DVR.”

From there you can set the number of frames per minute, the maximum length of the video (30 min, 1 hour, 2 hours) and where the finished videos are stored.

Note: The pop-up screens to make changes to the settings, and the boxes to actually do the recording do NOT show up in your video.

To learn more about Gaming DVR functions, visit this support page, or just play with it a bit and you will be recording in no time! Enjoy.